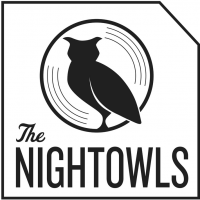 It’s 1,390 miles from Austin, Texas to Detroit, but when Austin band THE NIGHTOWLSrev their musical engines, that distance disappears with the speed of sound.

Founded in 2011 by frontman and lead singer Ryan Harkrider, the Nightowls—all ten of them—have been spreading that sound all over Texas ever since, while perfecting arrangements of the nine Harkrider compositions contained on GOOD AS GOLD.

When they were ready to record, they turned to award-winning Austin guitarist and producer Jake Langley, famed for his work with legends Roberta Flack and Bobby Blue Bland. Langley helped them create a feel that’s both retro and fresh—and sounds like a journey through 50 years of R&B history, without a hint of pastiche.

It’s no accident that one of those middle tracks, “You Don’t Have to Worry (I’ll Be There),” references a Jackson 5 hit in its title; with sweet harmonies by singers Tara Williamson and Ellie Carroll, the spirit of that elemental soul band jumps to life. The pleading ballad “I’m Sorry Baby” finds the Nightowls channeling Smokey Robinson & the Miracles. “Nice to Know You,” a heart-wrenching tale, stretches beyond convention with xylophone and electric sitar. “Break My Heart Tonight,” the album’s opener, contains a groove so infectious, it could pull even the grouchiest soul onto the dance floor. And in the upbeat, optimistic title track, the Nightowls convey their dedication, perseverance and above all, passion.

Hailing from all over the map geographically and musically, the Nightowls claim terrain from New England to Arizona and influences from Americana to funk. Bassist Rob Alton was trained at Berklee College of Music; other bandmates honed their skills in dive bars. Together, they push R&B’s boundaries while staying true to its horn- and harmony-laden heart—and soul.

Though they’ve been together only two years, the Nightowls’ combined chemistry so strong, it’s as if they bonded like glue at Motown’s famed charm school and stayed united ever since. The evidence may not be hanging in a frame (yet), but the Nightowls know their groove is GOOD AS GOLD.