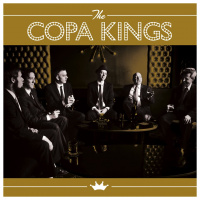 The legendary Las Vegas hotel, The Sands, was founded by Jakie Freedman, a native Texan. In the late fifties and early sixties, some of the greatest names in entertainment graced the stage of the world-renowned Copa Room at The Sands. This was an era when swing was king, everyone smoked cigarettes and “getting stoned” meant having a few too many cocktails. Now, fifty years later, it seems fitting that a group of musicians, calling themselves The Copa Kings, also hail from the Lone Star State.

The Copa Kings were formed in Austin, Texas, out of a desire to breathe new life into some of the great jazz standards of the 1930s, 40s and 50s. With great reverence, the band brings a unique passion, artistry and flair to the jazz music of this period. Led by vocalist Billy Murphy and arranger/pianist Rob Greenfield, The Copa Kings pay homage to some of our country’s greatest jazz songwriters and performers, including Frank, Billie, Ella, Louis Armstrong, Louis Jordan and Ray. Members of the ensemble have played with locally and nationally known acts, including The Atlantics, White Ghost Shivers, The Jazz Pharaohs and The Blackbird Trio.