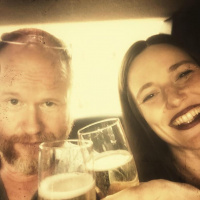 Joss Whedon’s Avengers and Avengers: Age of Ultron have rocked the Drafthouse screens, but now here’s your chance to see the premier of a brand new project fresh from the Whedonverse.

Two years ago, while filming Avengers II, Joss found Austin folksinger Shawnee Kilgore on Kickstarter and backed her latest record, A Long and Precious Road. The two forged a friendship and creative partnership via email and began writing songs together. It wasn’t until their first single, Big Giant Me, came out four months later that they spoke on the phone for the first time. They decided to keep collaborating and see what came of it.

What came of it was a gorgeously crafted and heartbreakingly personal 6-song EP, as well as a breathtaking music video shot for the project’s title track, Back to Eden, featuring Richard Jenkins and Ashley Johnson. Join us for the video’s world premier followed by an in person Q&A with Shawnee and the man himself, Joss Whedon.

After the showing you will be cordially invited to head next door to the Highball for a live album release show with Joss in attendence.