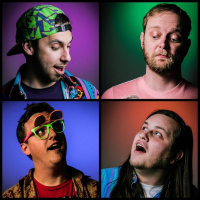 It's become a yearly tradition for Zoodust to do a special December show at The Highball - and this year it's a CHRISTMAS SHOW like NONE OTHER!

Zoodust is a 90's Cover Band based out of Austin, TX that plays a grand majority of top Alternative Rock hits from the 90's including bands such as Third Eye Blind, Fastball, Barenaked Ladies, Oasis, Sugar Ray, Sublime and Weezer (just to name a few). “The Z” was forged in 2009, by an incredibly music-savvy group of artists; each of which has extensively toured on a national level. After scoping out the local competition, it became apparent that the surrounding Austin area was in need of a more realistic 90's Cover Band. With that knowledge, Craig Dacy, Dean Barry, Adam Hovey and Mike Blackmon decided to set a new standard for cover bands. They have set out to create a realistic concert experience for the audience. Zoodust puts on a show just like the original bands would have, with no backing-tracks, and one-hundred percent live performance and instruments. They pride themselves in providing excellent crowd interaction, sing-a-longs, and banter that will keep everyone laughing and dancing in a surreal flashback to the not so distant past that is the 90's.

With a majority of the group hailing from a nationally known band, Riot Like Words, Michael Blackmon, a booming studio drummer in the Austin area, Craig Dacy, with the voice of an angel, and Adam Hovey with guitar shredding skills that bring comparisons to Stevie Ray, or Hendrix. The final step was finding a capable second vocalist 'slash' guitarist that would be the puzzle piece to complete Zoodust. Dean Danger, the lead vocalist of rising bands The Artillery and Discover You, and a close friend to the other Zoodust members, would be the one to fill that void.

The Z has now set out to give Central Texas exactly what they have been waiting for: A Metaphoric Time-Machine... ZOODUST!